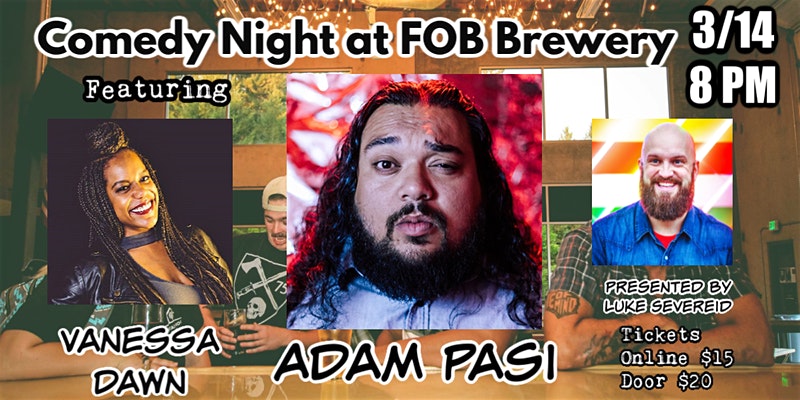 Join us for DuPont’s exclusive monthly night of Stand Up Comedy!

March’s headliner is the fantastic ADAM PASI the winner of Portland’s Funniest 2019! You might have seen him as a finalist in the Seattle International Comedy Competition. To round out the night Adam will be accompanied by local favorite, VANESSA DAWN, SAM WHITELEY and the show’s monthly balded and bearded host, LUKE SEVEREID

More about the comedians

ADAM PASI is a Portland comedian who has appeared on Portlandia as well as performed on the Bridgetown, Limestone and Big Sky comedy festivals. He was also the winner of the 2019 Portland’s Funniest person contest.

VANESSA DAWN is a comedian from Tulsa, Oklahoma now living in the Pacific Northwest. Her relaxed comedy style sneaks up on you like an unmarked car at a DUI check point. She has performed in the Blue Whale Comedy Festival, NW Women’s Comedy Festival, NW Black Comedy Festival, Black Girl Giggles in New Orleans and regularly performs at clubs and casinos throughout the NW.

SAM WHITELEY is an up and coming comedian based in Portland, Oregon. In addition to running the Midnight Gravy weekly comedy showcase at the legendary Space Room Lounge Sam has performed at Helium Comedy Club in Portland, OR, the Spokane Comedy Club, Tacoma Comedy Club and Curious Comedy Theater as well as on showcases across the state of Oregon and Washington. In March Sam will be featuring for Jake Silberman in Eureka, CA. Sam has a problem with enjoying vices in moderation, which is what attracted him to comedy in the first place.

LUKE SEVEREID is PNW native who got his start in comedy in Tacoma Washington. He’s taken his rambunctious brand of comedy on the road touring up and down the west coast and Canada yelling and telling jokes the whole way. He’s often been described as “What a comedian would be like if they had rabies.” and is constantly reminded by strangers that he looks like their favorite bouncer. He’s also performed in Bumbershoot, the Seattle International Comedy Competition and recently won “Best Comedy” at HUMP Film Festival.